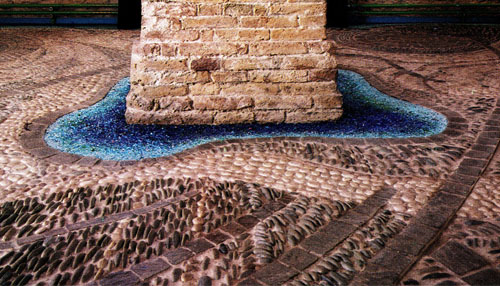 Back in 1512, due to the war, the monks of Saint Apolinaire in Classe, had been transferred to Ravenna. One year later, started building their new Classense Abbey, over a preexisting hospital, known as Santa Maria della Misericordia.
From the 17th century, the Abbey was transformed into library, hosting some of the greatest collections and manuscripts. The library is still present and in 1981-1983 there has been a major reconstruction of the groundlevel room known as Manica Lunga, which was transformed as an exhibition area.
The study of reconstruction-restoration was conducted by the Architect Marco Dezzi Bardeschi and Proffessor Maria Grazia Brunetti (from Florence Fine Arts Accademy) took over the design and implementation of the mosaic pavement, in collaboration with students of Fine Arts Accademy of Ravenna, Institute of art of Ravenna, and Florence Fine Art Accademy.
Tsiami Sofia and Ioannis Moris had the priviledge to work among with other students for this inspiring project.

Photos of the restored exhibition area of the Abbey, can be seen in the gallery below.